Hogs also called wild pigs or wild boars are extensively dangerous animals that severely threaten humans, other animals, and crops. In the many Gulf States like Texas, hog hunting is legal due to its ever-increasing population, reaching millions. In the urgent need to eradicate at least 70% of the hog population, states like Texas and other gulf regions actively promote hog hunting or wild bore hunting activities. If you’re looking for tips to go hog hunting, you can follow this article till the end and get some of the best advice.

Like other animals, hogs can also be tracked. But, they generally do not leave a noticeable imprint on the ground, making it difficult for hunters to follow the right track. But one prominent aspect of their trait is uprooting the soil in search of water. So, if you find uprooted ground that smells like urine and feces, you’re moving in their direction.

Wild boars or hogs are generally ferocious animals, and the best way to hunt them is by using predator calls. According to avid hog hunters, these creators instantly respond to such calls. But, it is best to do so from a safe distance as they can charge instantly at the sight of humans or other predators. Many hunters also play recorded sounds of piglets in sorrow, as they are highly protective of their offspring.

Hunting for hogs at night 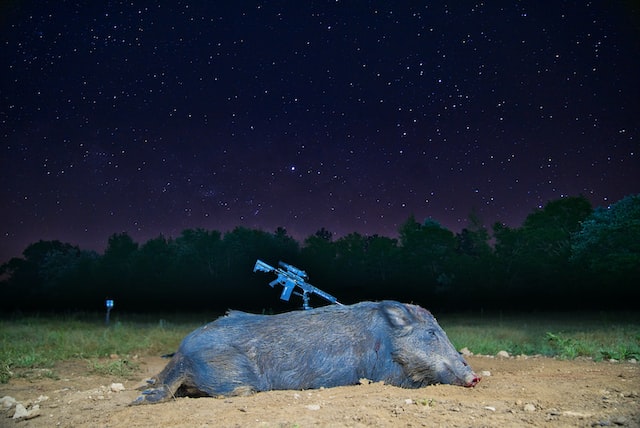 An increase in hunting activity has caused these creatures to become nocturnal. Hence, they also respond to predator calls at night, making it easy for hunters to hunt all day and night. But experts do not recommend it as they are dark and can often be camouflaged in the background.

Before hunting for any animal, it is imperative to know the anatomy of the animal. Since wild bores possess thick skin, they can easily keep bullets away from them. If you shoot them in their non-vital parts, it can lead to attack or escape. If you need the best fatal shot, you must aim for the heart or lungs, which are generally located five inches above the elbow and behind the shoulder. The brain is located above the ear, which can also kill the animal instantly. Wherever you’re aiming, ensure to do so from a safe distance to prevent an attack.

As mentioned above, since wild boars have thick skin, choosing the right bullet to pierce the skin profoundly and touch its vital organs is essential. Therefore, when choosing bullets, select the ones that can penetrate thick skin and break the parts of the bone.

Even the slightest flickering sounds can alert a careful hog. These creatures are susceptible to sounds, and it is essential to remain quiet. Even the smallest sounds can trigger their response.